C.W. Brown & Co. was founded on the same site as operating today in 1887 by English settler Cyrus Watson Brown. He raised his own pigs and making only Fresh Pork Breakfast Sausage and Scrapple in the cold weather months of October through March. After his last living heir Nephew Cyrus Watson Dobbs no longer wanted to operate the business and none of his offspring wanted to participate, he sold it to Mr. Robert Botto Sr.

Shortly after taking over the business, he immediately worked on developing his own flavor of Italian sweet and hot sausage. Originally from South Philadelphia, Mr. Botto was the youngest son of Vincenzo and Domenica Botto, a well known produce retailer in the city of Philadelphia from the Depression until his passing.

Robert Sr. and his wife Catherine married in 1959 and moved to Swedesboro, NJ to operate a food market for his brothers Henry and Joseph, after a short unsuccessful attempt in Hollywood to become an actor in 1963. In 1964 Robert took possession of the food market, and in 1965 purchased C.W. Brown from Dobbs. Over the years Robert worked tirelessly building the sales and distribution of Botto’s Italian Sausage in many retail stores in the South Jersey area. While doing such he added many other items to his product list including meatballs, breaded veal steaks, beef and sausage patties, brasiola, philly steaks and tomato sauce.

The Botto family also grew during this time as Robert Sr. and Catherine had 4 children of their own, Vincent, Robert Jr., Domenic, and Enrico. Catherine had managed to care for her children and run the store with the help of many friends and family members, while Robert Sr. focused on the growth of C.W. Brown. In 2007, Robert Sr. passed away, leaving a legacy familiar with many successful self made men in the business world for generations to follow. He built the Botto Italian Sausage brand name as the best in the industry.

C.W. Brown Foods, Inc. has continued to distinguish itself under the leadership of Robert and Catherine’s 4 sons promoting the production of the highest quality products, developing new and exciting products full of flavor, conveyance and cost effectiveness. 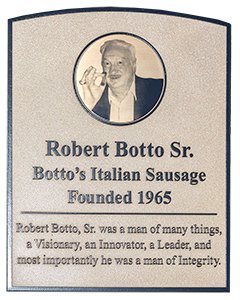 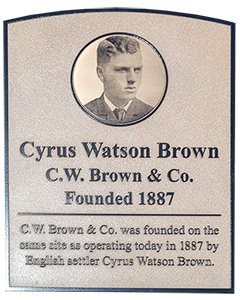